(This piece was written in 2006 for a narrative writing class at the Asian College of Journalism.)

Located about four km from Pondicherry town, Thengaithittu could well be Keats’ unravished bride of quietness. Even the sea here, for all its proverbial chaos, is a prophet in meditation. The tall coconut trees lining the coast, their heads nodding gently in the wind, embodied the very meaning of the name of the island – ‘island of coconuts’. Looking at the bright green vegetable farms, thick mangrove swamps edging the estuary and the villagers who welcomed me with happy smiles it was difficult to believe that this island could soon be lost to the hungry tide…

When I left for Pondicherry, I felt that it was too touristy for the adventure story assigned by Robin Reisig, my narrative journalism tutor. Its rocky beaches, French cuisine and the Aurobindo Ashram are popular already. The plan, therefore, was to visit Arikkamedu near Pondicherry, where the relics of the Roman sea trade were excavated in the 1940’s. Much had been written about this place as well. But thankfully like Columbus, who was determined to explore one place, I too ended up elsewhere. Upon reaching Pondicherry, my friend Probir Banerjee, an environmental activist with PondyCAN! (Pondy Citizens’ Action Network), informed me about a recent government proposal to expand the existing port in Pondicherry. Thengaithittu, the island abutting the port, would be worst-hit if this were to happen as it would become more vulnerable to strong tidal action, he said. Led by curiosity and quest I visited the endangered island.

“The best vegetables in Pondicherry come from Thengaithittu”, said Probir, who offered to take me around. “Yet the vegetable farm of Pondicherry does not feature prominently in its tourist map.” One reason may be that it is not for the hedonistic holidayer. There are no luxury hotels, amusement parks or museums here. For nature lovers of course the place holds plenty of promise.

A fifteen minute drive from Pondicherry town took us to the island. We had to cross a hundred metre bridge across the Ariyankuppam River, connecting the island to the main town. On one side of the bridge, we saw long colourful boats, painted in shades of pink, blue and green, moored to a pier. These boats belonged to the FishingHarbour that was built on the mouth of the Ariyankuppam River in 1986. The harbour caused severe coastal erosion on the beach as a result of which sand accumulated at the river mouth. Expansion of the port would mean further erosion and incalculable harm to the environment.

The bridge road led to the FishingHarbour at Thengaithittu. It was about twelve noon and there was no activity at the harbour. Several boats on the dock remained stuck in the sand. Two fishermen were seen busy rolling the ropes used for tying boats. One of them, Sivakumar was a boat owner. He said the Pondicherry government dredged sand at the river mouth using a machine but this was not enough.  It had been two weeks since he had gone out into the sea.

As I was speaking to the fishermen, Probir suggested that we climb the water tank by the harbour for a panoramic view of the estuary. The water tank was 50 feet tall and I, for one, suffer from intense acrophobia. My friend and guide sensing my fear said it was not good for a budding journalist to succumb to fear. Suddenly, I remembered the words of Andrea Kannapell writing in the New York Times, about the independence and strength of riding a kayak while out on an adventure trip. Wondering if climbing the water-tank would bring a similar sense of accomplishment, I took up the challenge. 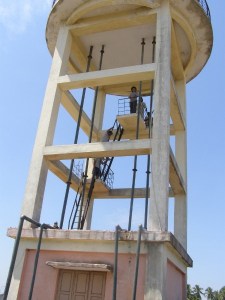 It was an old water-tank. The rusty railings needed cementing. The metal ladder was narrow with cylindrical rungs. It was not going to be an easy climb. I  gripped tightly onto the next rung as I climbed, trying hard to stay calm. There was lesser to hold on to as it got higher. After climbing three flights of stairs, I felt something buzzing inside my head. Probir, instructing like a military commander now, kept telling me, “Take deep breaths and do not look down.” Thus we climbed the full five flights of stairs. On reaching the top, I pressed my feet hard on the ground to gain a sense of balance.

I looked around. The sea was a giant splash of blue-green. A chain of rocks dumped along the coast formed a formidable wall. White frothy waves gently washed these rocks. The AriyankuppamRiver opened into the sea, flowing from the east, and the harbour formed an ox-bow ring at the river’s mouth. About thirty ships were docked at the harbour on the estuary banks. A dredging machine with hose pipes linked to it floated on the shallow waterfront. Looking through the binoculars, I spotted a flock of common egrets dipping their orange beaks into the water.  As for the journey down the tank, it took longer. I had to take five-minute breaks after every descent to put my wobbly knees to rest…

Later, I found out from Priya Davidar, an environmentalist at the PondicherryUniversity, that acute sand erosion on the beaches of Pondicherry and nearby villages led the Government to quarry rocks and pile them on the coast. So to save a coast they were denuding a rocky hill elsewhere. 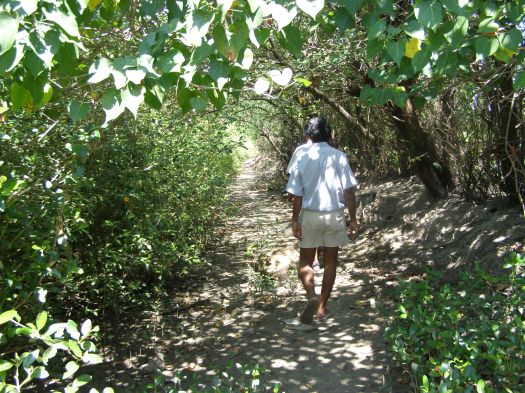 Probir and I meandered through the narrow streets of Thengaithittu village to reach the mangrove swamp on one of its ends. It was about 500 meters from the harbour. Raghu, a local farmer, told us not to miss the birds. “There are lots of them, with different coloured feathers”, he said.

A muddy trail ran beside the mangrove swamp. The mangroves were about ten feet tall trees with pointed shoots (through which they breath) growing between the trees. Regional Ecology and Environmental Federation (REEF), an NGO, had planted the mangroves here in 2002.

The pathway was dappled with sunlight filtering through the leaves. Snaky shrubs on both sides had formed an umbrella of sorts. Some of them were thorny too. Peeping through the dense assemblage of thorny twigs, to my left, a small green pond came into view. A thatched roof hut sat prettily on its banks. A wide wooden plank supported by underwater bamboo pillars extended into the pond. “This is a machan, a seat for fishing”, Probir said.

The wet earth below was perforated, home to a thousand creepy crawlies. But these were not the yucky sort. A colony of crabs that we saw, were painted unusually in fluorescent yellow, orange, vermillion. It was difficult to capture them in my camera as they hibernated the moment I moved closer. One had to be patient as a poet till the subject revealed itself. There were molluscs too, tiny creatures in light earthy colours, with spiral shells. Some peeped out of their shells showing mustard seed-like eyes. I recalled the black mollusc mantles lying on the banks of the harbour. Locals say that mollusc meat is in much demand in the surrounding villages. These are caught at the harbour and their outer skin is peeled and discarded on the banks.

The trail was about one km. long. We had almost reached the end but could spot no bird. Hiding in the thick of green, one of them sang a trisyllabic cah-too-aru. The high notes echoed in the green chamber. Had I known “birdspeak” (or “birdsing”), I would have warned them about the impending danger. Or had she sensed it already? The winding trail concluded at the backwaters of the Ariyankuppam River, its waters sparkling under the sun.

On our drive back to Pondicherry, we stopped by a two-acre vegetable farm in the village. A makeshift bamboo door got us into the field. Kaveri, a labourer was busy cutting the crop. She told us that the farm belonged to the Pullaiyar kovil, a temple for Lord Ganesha. They grew ponnanganni keerai (Tamil-A green leafy vegetable) here. “But the water has become saline in the past few years. It is not like before. Many people have been rendered jobless because of the infertile land and are migrating for want of work.” she said. Kaveri was not aware of the proposed port project. Local residents say that many vegetable farms in Thengaithittu have got destroyed due to sea water intrusion. We came across fields where the land showed white deposits of salt. Almost all agricultural land adjacent to the harbour has become infertile.

The proposed port is going to be ten times bigger, where containers with iron ore, coal, etc will be stationed. International cruise liners are also expected to arrive. If the project is realised the crabs in the mangrove might well turn sooty. I could not imagine what the estuary would look like if waste from port activities were dumped here, as proposed.

The lovely Ariyankuppam estuary is already a cesspool for municipal waste in the Union Territory of Pondicherry. The barren lands of Thengaithittu are slowly turning into a garbage dump. Heaps of waste could be seen burning at the turn of the bridge road. The Pondicherry government has grand proposals to develop mangrove walkways and tourist recreational centres in this peaceful village.

I closed my eyes for a moment, conjuring up the blue silence of the sea and left the place wondering if this was the calm before the storm…

4 thoughts on “In deep water”