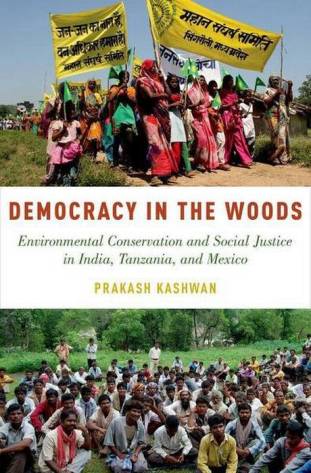 Rights to the forest have been among the most contested subjects since colonial times. In Democracy in the Woods: Environmental Conservation and Social Justice in India, Tanzania and Mexico, Prakash Kashwan uses a comparative political analysis approach to show how India, Tanzania and Mexico, with their varied forestland regimes, have negotiated the conflicts arising out of claims to forests for subsistence, industry and cultivation. In the process, the political scientist based at University of Connecticut in the U.S. shows that the state cannot always be the best arbiter of forest rights.

Kashwan’s thesis was supervised by political economist Elinor Ostrom at Indiana University, Bloomington. Her scholarly work investigating how communities succeeded or failed at managing common pool (finite) resources such as grazing land, forests and irrigation waters won her the Nobel Prize in Economics in 2009. Ostrom’s work marked a departure from the fundamental Lockean economic principle that private ownership of property incentivised economic actors to ultimately act in the general interest of society. She demonstrated rather how community ownership of common pool resources resulted in better management of these resources.

Kashwan deploys this idea in the context of forestland management. Using the case of Mexico, he shows how the country’s community-oriented approach to forest governance, fares better when it comes to addressing questions of environmental conservation and social justice (of forest dwellers), compared to India or Tanzania, where the state reigns supreme.

The author takes off from the massive forest eviction drives in both India and Tanzania. Whereas in 2002-2003 forestry agencies in India cleared 1,52,400 hectares of farmland and displaced 1,50,000 peasants citing state-led developmental imperatives, in Tanzania, similarly, a large number of Maasai settlements were burned by armed rangers from the Serengeti National Park, for environmental conservation.

Kashwan interrogates the institutional history of forestland regimes in these countries to demonstrate how colonial-era appropriation of forests to further commercial interests led to the gradual stripping away of customary rights to forest dwelling communities. But in Mexico, the Spanish conquistadors did not establish territorial jurisdiction over forests. Rather Spanish colonialism protected indigenous property rights and recognised ejidos as village grazing lands to be used for a socially productive purpose. These institutional legacies reflected in post-colonial developments in the three countries.

In Chapter 5, Kashwan looks at the contested politics of the Forest Rights Act (FRA) that was passed in 2006 to demonstrate how moving away from centralised decision-making for forest governance could be the way forward to resolve conflict, though, the results may not be evident at once. The FRA was hailed as a landmark effort at recognising the forest rights of adivasis in India. But through original research, the author demonstrates how the FRA’s implementation failed due to non-cooperation from entrenched forest administration. The author analyses village and district-level data to show that the total area of land claimed under individual ownership in 15 major FRA states stands at a mere 4%. Typical land claims under the new law were only in the range of 1.5 to 2 hectares.

The UPA government led by the Congress that enacted the law put its implementation on the backburner during its second term. Even the earlier legislation aimed to empower adivasi communities—the Panchayat (Extension to the Scheduled Areas) Act, 1996 (PESA)—failed to transform local governance and resource management. This is due to the state playing a central role in land-related transactions, despite liberalisation. The statistics are startling. In India, of 9,21,760 hectares of state forestland officially diverted for non-forestry activities between 1980 and 2003, more than 94% were allocated to large-scale development projects, including dams, mines, industrial enterprises and roads, the author notes, which is often the result of large-scale collusion between corporations, forest bureaucrats, and politicians. The author shows that the process has not reversed after the FRA was implemented, with over two lakh hectares of forest land diverted for non-forestry purposes between 2007 and 2011.

Compare this with the 1992 reform process in Mexico, when the state sought to privatise the ejidos—communal land for agriculture—leading to empowerment of the ejitdatarios (member of ejidos) to acquire stronger property rights; despite the government’s intention to privatise, the reforms did not mandate privatisation.

The absence of any discussion on prominent forest-based social movements such as the Chipko movement in the hilly regions of erstwhile Uttar Pradesh, India, or the Mexican revolutionary Zapatista movement, that sought to oppose the North American Free Trade Agreement (NAFTA) to safeguard peasant land rights, are curious omissions from the book. Both movements were part of the struggles of forest and peasant communities in these countries to retain their rights over forests and merited discussion.

Also, the frequent references to the works of others and quotations from academic sources obstructs the author’s own voice from coming through in the book’s narrative. It is perhaps a challenge of editing that OUP ought to have addressed.

Despite these limitations, Kashwan’s work makes an important contribution to the study of environmental policy. By providing a big picture analysis of forestry institutions in these three countries, he illustrates the value of decentralisation and community-based approaches to resolving conflicts over forests.